“My job is to manage Safeguard's online communication. In addition to the site, I also provide the social media channels with content. This means that I create and post articles, interviews and videos. Both the subject matter and the form vary, but are essentially focused on industrial safety." 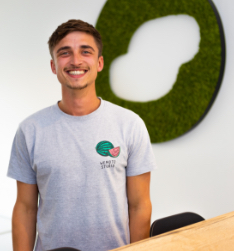 During Workers Memorial Day, victims of work-related accidents and occupational disease were commemorated and was at the same time a call for improvement. Because the persistently high figures must be and can be lower.

Every year, unions around the world commemorate workers who have become ill,, injured or even killed due to their work. This international memorial falls on the 28th of every April. Although the memorial is in the past, there remains plenty of reason to pay attention to the subject.

For example, the Federation of Dutch Trade Unions (FNV) mainly wrote in a  reflective and critical tone in their announcement to Workers Memorial Day. Both politicians and companies should and could do more to reduce the number of accidents and cases of occupational disease at the workplace according to a reaction from a trade union spokesman.

In addition to a minute of silence, the union organized a symposium in The Hague together with the Occupational Accidents Foundation. Attention was also paid to this day in other Dutch cities. In Twente, for example, following an investigation by FNV and an investigative journalist, extra attention was paid to concealed accidents at work. A phenomenon that was recently confirmed in the annual report of the Labor Inspectorate (2021).

Companies need to do better…
So it must and can be done differently. To start with, according to the union, companies must do it themselves. After all, they are responsible for a safe and healthy workplace. Companies are doing too little and should be doing more to push the aforementioned numbers down. Registration, internal cooperation and the obligation to report incidents are mentioned as points of interest.

Register
"Companies are now coming up short, because they register almost nothing about exposure to hazardous substances, while this should be the case," says Annika Heerekop, FNV spokesperson. Of the four thousand Dutch people who die each year as a result of an occupational disease, three quarters are said to be the result of working unprotected with hazardous substances. "We want companies to register better and for the Labor Inspectorate to check this more closely."

interal
The company is responsible for the well-being of its employees. Yes, the employer bears ultimate responsibility, but he or she does not have to solve issues surrounding healthy and safe work alone. Several stakeholders are involved in coordinating and/or supervising this. However, things often go wrong on that point, the spokesperson said. “There is only limited cooperation between employer, employee participation, prevention officer and core experts.”

Heerekop speaks about the limited cooperation, but also points out that this is sometimes simply not possible. “A third of companies have no employee participation body. It is even legally required to have a works council if a company has more than 50 employees.' (according to the Dutch law, ed.) The FNV therefore wants no employee participation to be fined, just like in other European countries around us.

report work accidents
In the previous annual report (2020) of the Labor Inspectorate, there was still talk about the suspicion 'that not all work accidents requiring notification are reported to the Inspectorate'. Two years later and the suspicion has become reality. What is known about the phenomenon of under-reports and was the seriousness not seen or were there other focus points? Sharon Ponsteen had been doing research as a freelance journalist for some time and contributed to the FNV investigation.

“The suspicion had been around for some time,” Sharon points out. She refers to an internal memo from the Inspectorate from 2015. This became clear after she invoked the Public Disclosure Act. Back then there were already talks about sub-notifications. "It turned out that about 30 to 50 percent of construction accidents resulting in hospitalization were concealed." (accidents that must be reported are accidents resulting in permanent injury, hospitalization or death, ed.)

The union started an investigation in collaboration with the journalist and distributed a survey among its members from Twente. According to Regional Director Hans Hupkes, the survey reached no more than 20 percent of the workers in that region. Of that percentage, 24 accidents at work were not reported in the past year, he tells the Twentse Courant. (regional newspaper, ed.)

The results are often described as 'the tip of the iceberg'. For example, these came from 1 of the 35 labor regions and it was mainly members with a permanent job who responded. This excluded the most vulnerable group, such as flex workers and labor migrants.. One thing seems certain: the numbers are probably higher than has been shown.

The Dutch Labor Inspectorate is reportedly coming up with a plan of action this year to combat this problem. What that will be exactly is still unclear.

Inspection
The union's finger is not only pointing at the business community. The Labor Inspectorate also falls short in its functioning. According to the union, the regulator should make better decisions and estimates based on information in order to ultimately determine and tackle risks.

‘The Labor Inspectorate must be expanded with more employees and using new enforcement techniques such as having employers send exposure registers of hazardous substances. The Inspectorate should also monitor more for limit values', says Heerekop.

To give a small example: 'the chance that an inspector will drop by unannounced on a construction site is once every 24 years', wrote Tubantia (2019). This leaves some companies the space to make a cost-benefit analysis, ArboNed said in a more recent conversation. In other words, safety becomes a calculation of probability and has no priority for a particular group.

Having too little capacity and outdated enforcement techniques leads to a minimal chance of being caught. This results in insufficient attention to creating a safe working environment and therefore requires a new way of enforcement.

Workers Memorial Day
With the theme: 'Make a safe and healthy workplace a fundamental right', on the 28th of April not only were the victims commemorated, but it was also a call to action to reduce the high figures. Working safely should be a fundamental right worldwide, but that’s not the case yet. Although we do have a strengthened legal position as an employee in the Netherlands, there is still work to be done here.